No, you’re right, it’s Friday. And I’m posting late. My life since January has taken on a frantic quality that has me spinning, and now I’m back to work until July, so I’m going to have to take drastic measures. And the first one I’m taking is changing my blog.

I’m putting Moonday Mania and Thursday’s Bite on hiatus until further notice. INSTEAD,  I’ll post on Sensational Saturdays a variety of topics that will sometimes be writer oriented, sometimes paranormal oriented, and sometimes just be whatever the heck I’m thinking about.

There, I did it, I cut back. My friends will be so proud of me!

So, today will be the last Thursdays Bite for a while, and I’m going to share with you some YA links to some fabulous books that my very cool friends have just put out! Now I don’t write YA, and most of you may not read YA, but I’ve found quite a lot of adults do read YA. And those that don’t sometimes have children who do read it. So I’m sharing the links and books in order to spread the word!

I’m very excited to say that JL Bowen‘s debut novel Healer is available in e-form from Featherweight Press. This is the first book in the series, but it’s not a cliffhanger, so don’t worry about being held hostage till the next book. Plunge into Armand’s world as he discovers that everything he’s every thought was true, is totally wrong.

Thirteen-year-old Armond Costa heals in three days, no matter what abuse his uncle and aunt inflict upon him. On his fourteenth birthday, he sprouts wings and discovers his aunt and uncle had lied to him. He’s the lost Golden Demon’s Healer. His father, King of the Golden Demons, insists he return with him and save his people from being persecuted by their mortal enemies, the Dark Demons. Now, Armond must choose between the Ellis brothers and seventeen-year-old Rusty Owens — the only family he’s ever known — or condemn the Golden Demons to extinction.

And now, most of you know Brinda Berry, she’s a fabulous source for authors finding out about social media and techie stuff, but you may not realize she’s also a YA author! Her new book in her Whispering Woods Series is called Whisper of Memory. It continues the story of Mia, who is special in two ways: she has Synesthesia (want to know what that is, click HERE to read Brinda’s post on Paranormal Freebies.) and she has a gift for extraordinary perception.

All Mia ever wanted was to fit in at Whispering Woods High. But being a portal-finder who dates a guy from another dimension sort of makes it hard.   Mia’s brother disappeared over a year ago, and now agents from the IIA are policing people’s movements through dimensions. She’d trusted Dr. Bleeker from the local university when he’d told her the IIA were the bad guys. But even a girl with an extraordinary ability to sense things can make mistakes.

Now two people are dead, and as a portal gatekeeper for the IIA, Mia needs to find Dr. Bleeker before he hurts anyone else. And her boyfriend Regulus, an Agent for the IIA, carries secrets of his own. Between learning about weaponry, finding the perfect dress for the winter formal, and catching bad guys, who has time to fit in?

So that’s all folks. I’ll be hard at work editing and doing all the other stuff that has kept me crazy, but I won’t be blogging quite so much for a while. You can find me here on Sensational Saturdays and also on the first Friday of the month at http://paranormalfreebies, where I will still be doing paranormal focused bites.

Interview with a Synesthete

a blog on the craft of writing

Welcome to Moonday Madness on Jessica Aspen Writes. Today we have a special treat, author Brinda Berry shares how she did research for her very interesting YA novel The Waiting Booth. I’m just going to whet your whistle by saying it’s about “A missing boy, government agents, an interdimensional portal…” and as you’ll read here Brinda has included so much more.

Interview with a Synesthete 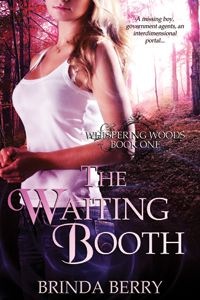 There are many types of research that I conducted while writing the first book in the Whispering Woods series, The Waiting Booth. In today’s technological environment, most research can be conducted in the privacy of my own home. I have a library of information at my fingertips through resources found on the internet.

In a recent writer’s group meeting I attended, one author mentioned that she missed the days of interviewing people for information. Before the widespread availability of online resources, a writer would either telephone or visit an individual face-to-face and learn about a certain occupation or experience. The writer in my group mentioned being totally charmed by the helpful nature of one such person when she did some research about cowboys. (Get your mind out of the gutter. This was all very innocent.)

People love to share their knowledge and experiences, and it may be within reason to locate those experts. On the other hand, there is an alternative. I used YouTube to find interviews that would help me develop the main character in The Waiting Booth. I had already located written resources online about a condition called synesthesia, but I wanted more. Synesthesia is a neurological condition where two or more of  the five senses are intertwined.  For example, a person with synesthesia may taste colors and see musical notes.

I haven’t met anyone with synesthesia, but my main character, Mia, is a seventeen-year-old synesthete. I wanted to have a “feel” for her point of view as the story is written in first person. So, I went to YouTube.com and typed “synesthesia” in the search bar. How many videos are online about this topic? As of 9/27/2011 at 11:54 CST, there are 14,600 results. Are they all relevant? No, of course they aren’t. Did you know there’s a band called Synesthesia? I didn’t either.  To filter those videos out of my search, I changed my search term to “synesthesia condition.” The results of that search listed 101 videos. Now, it’s a much easier task to browse the documentaries and other short clips that are more relevant to my research.

You can see by the number of views whether the video is a popular one or not. You can also determine if you think the source might be a reliable. Anyone can upload a YouTube video. The owner will be listed along with the number of videos uploaded by that person.  Another interesting aspect was reading comments to certain videos. A warning here for you- comments may be not be moderated.  Here’s a terrific example of a short video I came across today on synesthesia: http://youtu.be/KApieSGlyBk

In The Waiting Booth, I did take liberties by embellishing Mia’s condition of synesthesia with an extra ability to sense portals. The video listed above demonstrates how the synesthetes could see some things more easily than the non-synesthete, so I took that a step further. The YouTube videos gave me some great ideas on how synesthetes view the world.  There’s a chance to see the emotions that might be tied to the subject’s answers, and I would miss that in a written piece. Seeing and hearing the video interviews made a huge difference in my understanding and the development of my character.

I’ve already used YouTube again in research for the second book in the Whispering Woods series. It’s a fun way to learn about people and experiences. The biggest risk for you as a researcher is getting sidetracked. YouTube videos can be so darned entertaining.

Brinda Berry lives in the southern US with her family and two spunky cairn terriers. She has a BSE in English and French and a MEd in Learning Systems Technology. She’s terribly fond of chocolate, coffee, and books that take her away from reality.  She doesn’t mind being called a geek or “crazy dog lady”. When she’s not working the day job or writing a novel, she’s guilty of surfing the internet for no good reason.

Saturday’s winner is Elaine Cougler! Congratulations Elaine and send me your address through my contact page and I’ll get your book to you!